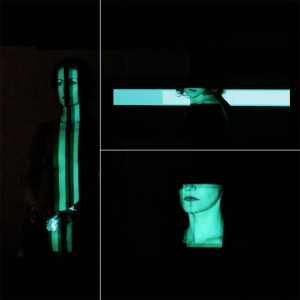 The video is used as an organic light source and a bright vibration revealing by fragment -or diluting in space- the performer’s body. It is partially generative video: the video signal initial is generated and/or modified by the sound signal modifying some parameters of the image: opacity, colour, scales… 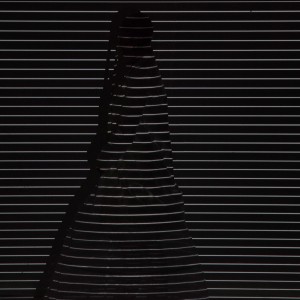 David Mathias’s performance consists in moving these generated lights and forms in space to fetch or hiding parts of the performer’s body in real time. The choreography and he’s performance are then in a form of dialogue. These focus created by the light are bursting the choreography in multiple modules and different point of vue on a same action or presence.The video signal acts as a visual incarnation of the sound, by the fact of the synchronicity and the variation of the light due to sound’s accidents and scratches of the vinyl. Technically, the sound signal goes from the turntable to a computer, which translates the sound signal into light before re-throwing it on the performer’s  body. 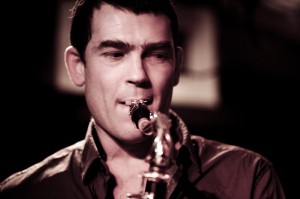 « The tenor saxophonist Sylvain Cathala is, for more than ten years, the artisan and the discrete promoter, but always inspired, of an introspective and intelligent jazz music where complexity of the shape and the quality of the sound play equally. His trio, consisting of Sarah Murcia and Christophe Lavergne, is once again the opportunity to Cathala not to put forward, but to build a real band. « 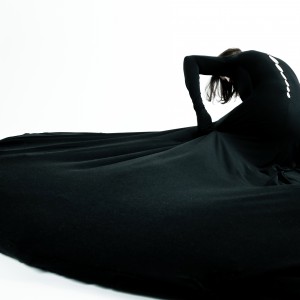 Born in New York, Christina trained at the renowned Merce Cunningham Studio. In 2000, after completing her diploma in English Literature and Dance from Barnard College, Columbia University, she decided to explore Dance in France. Upon arriving in France she met and danced for the famous french choreographer Jean-Claude Gallotta. After 2005, she began working as rehearsal director and teacher for the Centre Choreographique of Grenoble, directed by Gallotta. In this capacity she has traveled all over France to teach the repertory of Gallotta to non-professionals and professional dancers alike. Read more